Small Changes Can Have A Large Impact!

Posted on Sep 04, 2019 By David
Every day we are witnessing more and more of our planet being rapidly changing for the worse. Our rain forests are on fire, one and a half acres of rainforest are lost every second with tragic consequences for both developing and industrial countries. Our oceans are being filled with trash and we are losing it's wildlife at an alarming rate. On the surface it might not seem like such a catastrophic change but it really is!

Lets talk about the rainforests first. We are losing one of Earth's greatest biological treasures just as we are beginning to appreciate their true value. Rainforests once covered 14% of the earth's land surface; now they cover a mere 6% and experts estimate that the last remaining rainforests could be consumed in less than 40 years. According to analysis of satellite data, tropical forests are being destroyed at a rate of at least 8 million hectares or 31,000 square miles a year. That's an area the size of the state of South Carolina or the Czech Republic that is being chopped down every year. Brazil, Indonesia, the Democratic Republic of Congo, and Malaysia had the highest rates of rainforest loss between 2012 and 2014 according to research by Matt Hansen of the University of Maryland How many trees is that? Researchers haven't quite settled that question, but a study published in 2015 suggested that more than five billion trees are cut down across the tropics every year. Why are the rainforests being cut down? Of course money, but when we really look deep into it we see the biggest drivers of deforestation are agriculture — both industrial and subsistence — and cattle ranching. Much of this production is not consumed locally — instead it is sent to cities or overseas. That means consumers who may live far away from rainforests are usually at least partly responsible for the destruction of these beautiful and important landscapes. Land cleared to grow grain to feed cattle or land cleared for cattle grazing are the main reason we are losing our rainforests. Brazils growing beef industry accounted for over 20% of total exports and that can grow in the coming years. In other countries like Indonesia rainforest is being destroyed for palm oil which goes in so many products. Here is a list of just a few:

Why are the rainforests so important? Rainforests are often called the lungs of the planet for their role in absorbing carbon dioxide, a greenhouse gas, and producing oxygen, upon which all animals depend for survival. Rainforests also stabilize climate, house incredible amounts of plants and wildlife, and produce nourishing rainfall all around the planet. Now by destroying the rainforests we are losing our clean air and on top of that the method used to clear rainforests is to burn the land which releases even more carbon into the atmosphere rapidly increasing climate change. The cattle raised for consumption is responsible for 41% of livestock greenhouse gas emissions, and that livestock accounts for 14.5% of total global emissions. And methane -- the greenhouse gas cattle produce from both ends -- is 25 times more potent that carbon dioxide.

We will talk about what we can do to bring some change in just a bit, but now lets take a look at our Oceans.

Around 30 percent of global fish stocks are overexploited or have already collapsed; 58 percent are at their limit. The countries with the largest marine capture rates in 2015 were China, Indonesia and the US. In total, 23 countries are responsible for 80 percent of the world's fish and seafood production - most of them high-income countries. Conventional aquaculture, often seen as a solution, actually makes matters even worse. This industrial mass fish farming, partly in cages in the oceans, uses up huge amounts of seafood as feeding material. Aquaculture farms also pollute their surrounding areas with excrement and facilitate the spread of fish diseases.

More rigorous fishing quotas and better fishery management could help. Fish stocks can recover within decades or even years, but action needs to be taken soon before some species are critically endangered or even lost forever.
Our Oceans are also becoming alarmingly acidic.

Carbon dioxide emissions have increased significantly since the beginning of industrialization in the 19th century. But the concentration of CO2 in the atmosphere has only risen by around 40 percent. That's because much of the CO2 ends up in the oceans, as the gas dissolves in water. Oceans, therefore, help slow global warming but that help comes at a price. When CO2 dissolves in water it increases ocean acidity, leading to a drop in pH, the scale used to measure acidity or basicity. In 1870, the average pH of seawater was 8.2; today, it's at 8.1. By 2100, that value is predicted to even become more acidic, dropping to 7.7. With so much more CO2 in the air due to deforestation and burning our oceans are being taxed to a breaking point. Becoming so acidic coral reefs are dying and just for an example Oyster farms along the Californian coast were forced to close because seawater there had become too acidic for oyster larvae. They died and with them a whole industry.

Our Oceans are warming and pollution is taking its toll. Our oceans absorb more than 93 percent of the heat generated by man-made CO2 emissions, warming the water. Between 1900 and 2008, seawater surface temperature rose by 0.62 Celsius (1.12 Fahrenheit) on average. In some areas in the Western Pacific Ocean, that increase was as much as 2.1 Celsius. Warming is major problem for many underwater organisms, and in particular corals. Killing of the coral reefs and depleting fish stocks is killing lots of marine life across the planet. 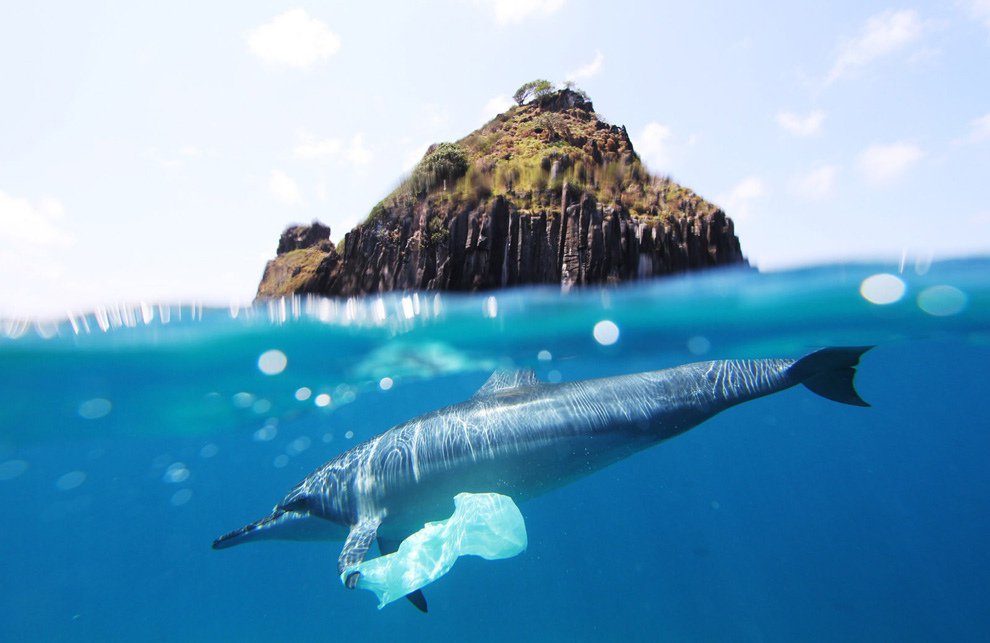 Our trash is ending up in the oceans. Plastic has filled our oceans like never before. garbage patches that are estimated to measure between 700,000 and 15 million square kilometers (up to 5.7 million square miles) are floating in our oceans. Most trash doesn't end up there in fact as much as 99 percent of plastic waste never reaches these patches. A lot ends up on shorelines, polluting coasts and putting seabirds, turtles and other wildlife in danger. Most of the waste, though, decomposes or is broken up into tiny pieces - microplastics, distributing themselves on the ocean floor, in sea ice at the poles and even in fish who ingest them as food and consumers eat the fish and are poisoning themselves.

And there are other pollutants as well, like nitrate and phosphate from industrial farms that enter the oceans via rivers. These substances cause algae to bloom. When algae die, they are decomposed by bacteria, which reduces the water's oxygen content so that nothing else can grow there. Industrial wastewater and emissions also add dangerous metals and chemicals to the oceans, including lead, mercury and persistent organic pollutants. The latter accumulate in the fat of whales, sharks and other animals

Why are the oceans so important?
I know its a lot to digest. It seems hopeless but we have more power than we understand. Here are a few steps we can take to help bring change. 1. Bring Change With Your Dollar:
Use your purchasing power and make sure your money is going towards positive change. By supporting eco-friendly products which are less damaging to the environment, you’re encouraging companies to source and produce their products in a sustainable way. Avoid items with palm oil and support companies working to bring change. You can also donate to charities working to improve our environment.
2. Reduce The Food Waste You Send To Landfills:

When food ends up in landfills it can not biodegrade properly and this leads to potent greenhouse gases being emitted into our atmosphere. So be conscience of how much food you waste and how much food you actually need. It will save you money and our environment.
3. Consume Less Animal Products:
Yes, the truth is animal agriculture and fishing is leading to the destruction of our world. Consume less meats and dairy and look for other alternatives.

Moving away from a meat-dominated diet towards a more plant-based one can lower your impact on the environment. Vegetarian and vegan foods are massively on the rise and becoming far more common in restaurants, cafes and supermarkets, so you’ll rarely struggle. Not only that, but cutting down on meat and dairy products can reduce your weekly food bills. We need to make wasting our resources unacceptable in all aspects of our life.  Every product we buy has an environmental footprint and could end up in landfill. The impact of plastic pollution on our oceans is becoming increasingly clear, having drastic impacts on marine life. Recycling and reusing what we can reduces the amount of new materials we are making, and upcycling is a creative way to make old items into something more valuable. This could be reusing a jam jar as a candle holder, or using old tins as plant pots – the possibilities are endless! Also, by lessening the amount of things we buy, we will also be lessening the amount of things we throw away. It’s not just the products we buy. It’s estimated that a third of all food produced in the world is lost or wasted. Do your bit by eating up leftovers and use any ingredients you have spare to make interesting meals. Try to waste as little food as possible, and compost the organic waste you can’t eat.

Choose to walk when you can or ride a bike. Find ride share programs and carpools. Little changes can have a big impact if we all get involved. If you need to run multiple errands in a given day, do them all at once so you waste less gas! And if going electric is an option for you, that might be something good to look into.

One of the best things you can do is to keep yourself informed – the more you know the better. It leaves you better equipped to have those conversations with your friends and family and the people you want to influence. Get yourself clued up on the facts, stay up to date with recent news on the state of our natural world and work out what you can do. We have the world at our fingertips, so learn from influential people, keep up with the news and research organizations that are working to make our planet a better place. Don't underestimate the platform you have.

Looking at the labels, avoiding palm oil and unsustainable growing methods goes a long way. Look for labels like sustainability grown, organic, locally grown, ocean safe, dolphin safe, rainforests alliance certified and FSC. Keep an eye out for labels that prove that companies are doing thing smarter and better for the environment. 8. Donate to Organizations Making a Difference:

Donate your time or money to amazing organizations helping save our rainforests and oceans. Support companies that donate a portion of sales to improving our planet.

It seems like small steps but one of my favorite quotes sums it all up: “My life amounts to no more than one drop in a limitless ocean. Yet what is any ocean, but a multitude of drops?”
― David Mitchell, Cloud Atlas.

If you would like to support Wakened Apparel, it is our goal to produce items made from recycled materials, US Organic cotton, made in USA or Fair Trade. And as always we have donated a portion of our proceeds to our amazing charity partners that help plant trees worldwide, save elephants and rhinos, homeless pets, and our oceans. Head on over to SHOP WAKENED APPAREL and help better our world.